Baby cribs must be safe for babies to sleep, crawl, and play because an infant has no way to see danger until before a baby crib injury happens.  Anyone in the business of making or selling baby cribs can be liable if a defective crib leads to a baby crib injury.

The Nationwide Children’s Hospital released a study that baby crib injury sends about 10,000 babies to the emergency room every year.  100 babes die every year because of dangerous sleeping environments. One parent whose child suffered a baby crib injury said “You put your kid to bed and you get this sigh of relief that they’re in their crib and safe.”

A study from the Official Journal of the American Academy of Pediatrics found that from 1990-2008, about 181,654 babies under age 2 were taken to emergency rooms throughout the United States for some kind of baby crib injury or injury from playpens, and bassinets.  That is about 9,561 cases per year.  83.2% of the injuries involved baby cribs.  66.2% of the injuries were from falls.  Most injuries were to the head or neck (40.3%).  Infants with broken bones were admitted to hospitals 14% of the time.  Babies under 6 months old were almost 3 times more likely to be hospitalized than older children.  2,140 children, or 1.2 percent, died — and the most frequent cause of death was from becoming caught or wedged in the crib.

The New York City Department of Health and Mental Hygiene Bureau of Maternal, Infant and Reproductive Health 2004-2011 report states that “accidental injuries, which are often preventable have replaced SIDS as the second leading cause of post-neonatal death in NYC.” 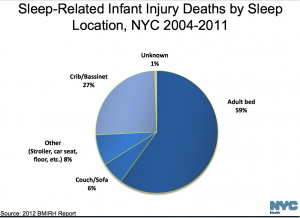 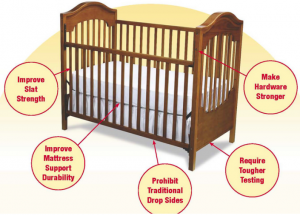 New York senate bill A356-2015 would direct the commissioner of health to distribute baby crib safety information to maternity patients discussing baby crib recalls and federal standards on manufacture and sale of baby cribs.  The New York legislature said in the memo to the bill that many parents and caregivers are not aware of the risks associated with unsafe baby cribs.  Unsafe ban cribs have led to preventable deaths.  The bill would seek to help parents make informed choices.

New York City day care centers with baby cribs must also comply with certain laws that state: “All cribs must be in compliance with the safety standards established by the Consumer Product Safety Commission. Stackable cribs are prohibited.”

Consumer Affairs lists baby crib recalls. In 2015 so far, Bexco Enterprises of Montebello, Calif., is recalled about 11,700 DaVinci cribs in the U.S and Canada. Baby’s Dream Inc. is recalling about 4,600 cribs and assorted pieces of furniture because they contain excessive levels of lead paint, which can cause nervous system damage and delayed development if ingested

In New York, anyone in the business of making or selling baby cribs can be liable if the crib is defective and hurts or kills an infant.  A New York Personal Injury Attorney can hold a negligent company accountable for a baby crib injury or death by applying strong New York and national laws that protect children and parents.