Tuesday, a massive crane collapsed onto the Tappan Zee Bridge.  The crane covered virtually the entire width of the bridge where it collapsed and injured multiple people. Authorities are concerned about the extent of possible damage to the bridge and safety on the construction site. Traffic is stopped for miles and is expected to be backed up for hours as the area is cleared and inspected.

The Tappan Zee bridge connects Rockland and Westchester counties.  About 138,000 vehicles crossed the bridge per day, which is more than its intended capacity.   The City Journal reported that the bridge was not built for long-term durability.  It was originally designed to only last 50 years.   Reports from 2009 noted that one critical fracture could cause the bridge to fail completely.

The Tappan Zee was featured in a History Channel segment regarding crumbling American infrastructure.  The collapse of Minnesota’s I-35W Mississippi River bridge in 2007 raised worries about the Tappan Zee Bridge’s structural integrity.  As a result, new bridge construction began.  The new bridge involved over 6 million hours of work for over one thousand workers, many of whom work over the Hudson River.  Cranes were a prominent fixture along the bridge.  One of the largest cranes in operation at the site was the “Left Coast Lifter.”  Demolition of the old bridge was slated to be in February, 2017.

Reports from first responders and officials currently state that traffic conditions are expected to increase as the bridge is inspected and the crane is cleared. 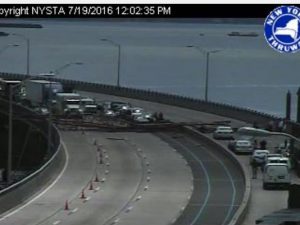